Parklands, or Quendon Hall, is very close to Saffron Walden, and so virtually my ‘local’ wedding venue, but until now I have never had the opportunity to DJ there. I’d visited an open day once though and been struck by what an impressive place it is, on the edge of the beautiful Essex village of Quendon set about a mile down a private road, making it all the more striking when it finally looms into view! 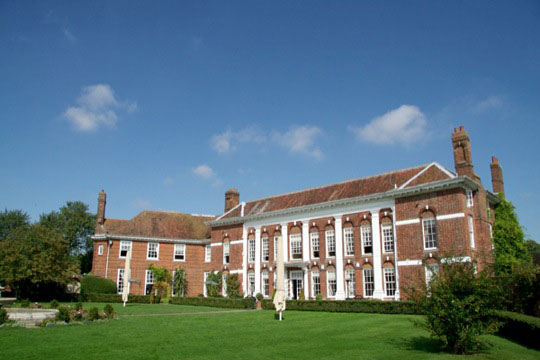 Mags had seen one of our adverts in a wedding magazine, and got in touch asking me to meet her and Dan to discuss our wedding DJ services. I headed down to meet them at their house one evening in early summer to chat about their wedding music and go through our different options – though it turned out that Mags already had her heart set on our indoor Disco Shed!

The wedding was on a Thursday. I arrived just before the ceremony to be directed to the back of the house where an enormous marquee is pretty much permanently erected. It must be at least 200ft long and 50ft wide and can sit 100 people apparently though I would expect you could fit many more in than that! This was where the meal and evening reception were taking place, so I unloaded and the indoor shed and started setting up. The entertainment end of the marquee is great, with a permanent dancefloor and stage, plus it’s screened off from the rest of the tent until it’s time for the party so I could afford myself a fairly leisurely set-up for a change! 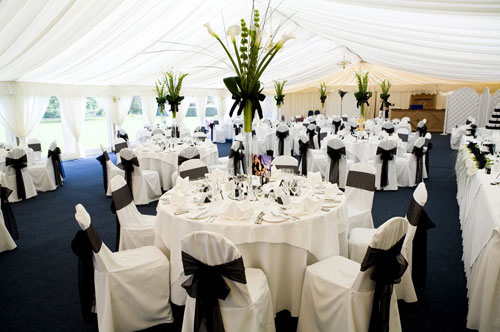 Not even close to half of Parklands marquee!

Dan & Mags had also asked me to provide music for the drinks reception, taking place in the main house where they had their own sound system, so I popped down there, lap top in hand when the time came. I think I’ll finally invest in an iPad for this soon as it’s a bit more portable – any excuse…

I met Dan’s best men shortly afterwards back in the marquee where they were rehearsing their speech – they were using our wireless mic for this, which are easy to use but it was still a good opportunity to show them what to do. When the time for the speeches came, after the meal the venue staff commented that these were better than their own which was nice to hear as I’ve not had them long! But they coped no problem with the enormous space and the number of people in the marquee, so definitely a good investment!

There was just time to enjoy a nice meal in the main house with the photographer before it was time for me to start playing. Dan and Mags had had some dance lessons for their first dance, which segued one of their favourite tunes, With Arms Wide Open by Creed with a Beyonce medley which kicked things off nicely!

I hadn’t been given an enormous playlist, but was warned that their guests would definitely like some UK garage at some point. I’d planned to save this for later on, but somehow ended up playing loads of this after less than an hour! Apparently it’s never too early for some 2-stepping though and they loved it! 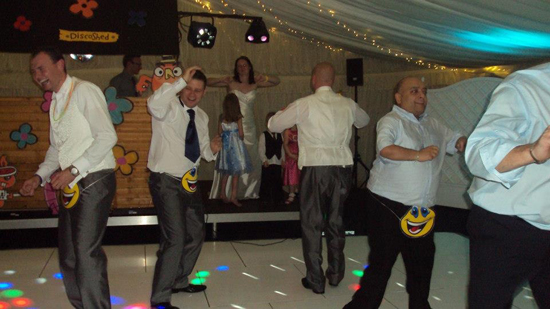 Dan had also planned a dance-off between the lads on the stag do to Sexy And I Know It by LMFAO. I got Mags up to help judge as the lads went backstage, then let them have it! I’d not been quite sure how this would go but hats off, (and even some clothes off in some cases!) to them, the lads gave it their all and the guests loved it! Mags and I couldn’t decide who to award it to, so we put it to the people, using the tried and tested clap-o-meter. Almost inevitably, the people did the decent thing and elected Dan the winner so amusingly he had to award himself the winner’s t-shirt!

The dance-off was just one highlight of many, with guests keeping the dance floor packed all night! I was particularly impressed by how many people stayed until the end, especially as so many had work the next day! And just before midnight, I thanked everyone and played the full length version of their first dance for Dan and Mags which led to a huddle on the dancefloor! 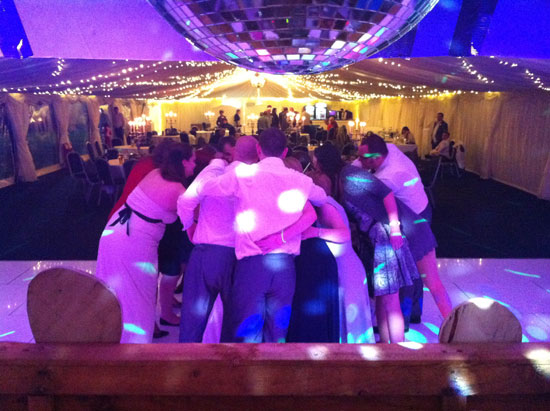 It was a lovely end to a great night! I lost count of how many times Dan thanked me as I packed up, but it was so lovely to have such an appreciative groom and helped the feeling of a job well done!

I really enjoyed playing at Parklands for the first time. It’s an excellent, dedicated wedding venue, with lovely, helpful staff and able to accomodate weddings of almost any size comfortably in appropriate settings. Hopefully we’ll be able to return soon…

“Just wanted to say a massive thanks to you for helping to make our wedding party so brilliant! The music was awesome! Everyone had an amazing time!”

“Just wanted to say thanks again for making our wedding reception so memorable. Everyone we have spoken too have all said how much fun they had and this is exactly what we were hoping for our big day.”

Please keep us up to date with any events Disco Shed are doing as we would love to come and see you again sometime.