Find out all about our super wedding DJs!

All Disco Wed DJs are experienced professionals with backgrounds in the music business. So, none of us are typical wedding DJs or ‘personality jocks’, instead we enjoy a reputation for simply playing great music, well!

When you book a Disco Wed DJ, you can expect the same first class set-up and service from whoever plays for you – we all use the same equipment, refer to the same playlists, and DJ in a similar way – meaning we just mix your songs and don’t talk over them!

We introduce you via email to your DJ at the earliest opportunity so you can get to know them. We’re always happy to arrange a phone call, skype chat or meeting where possible to discuss your music choices and other requirements for the day.

As we’re all working DJs, it’s likely we’ll be playing a gig somewhere that you can come along to and check us out in person, get in touch to find out where!

Here’s a bit more info about just some* of our brilliant wedding DJs:

* Please note, this page does not contain all of our DJs, more will be added over time, and others ask not to be included here in case it causes confusion with their other musical occupations! 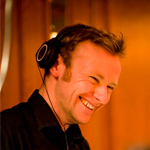 Paddy is the co-creator of the Disco Shed, founder of Disco Wed and owner of Peepshow Productions. He started DJing in 1997, first got paid to do so in 2002, and set up audio-visual club night Peepshow in Oxford in 2003.

During a boozy house party at his mate and fellow promoter Count Skylarkin’s place in 2005, the pair of them decided it would be a good idea to take the shed they were in at the time to their favourite festivals and so the Disco Shed was born. Disco Wed grew out of this over the following years…

Paddy still regularly plays some of London’s better bars and clubs and – never happier than when he’s in a field – he has rocked festivals including Glastonbury, Reading, Bestival, Latitude, the Big Chill, the Radio One Big Weekender plus too many more to mention! 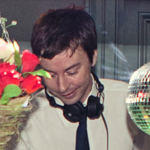 Softly spoken Scotsman Jason “The Cat” King has been number one in Japan. Seriously! He was a member of Oxford’s The Animalhouse whose debut release hit the top of the Nippon hit parade.

He still makes beautiful music and is a musical connoisseur with an enviable collection of vintage rock & roll, rhythm & blues, Brazilian samba, jazz, funk, soul and pretty much anything else you care to mention. He’s a mighty fine DJ to boot too! 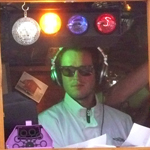 He tailors his sound to each event and venue to ensure that the sets he plays remain exclusive to that place only, helping his mixes to feature on both Radio 1 and XFM. Harry has played in countries all over the world, including Australia, Colombia, France, the Czech Republic and Argentina. 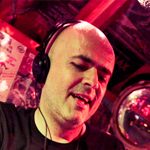 Born & bred Brightonian, Gaz is the greatest non-famous party DJ known to man. As Del Gazeebo he is the man behind the trailblazing Soundly Beaten & No Identity cut & paste imprints which received DJ support from some of the biggest names around, including Rob Da Bank, Eddy Temple-Morris and many more.

While not running labels these days he continues to twist up the classics for his own sets as well as dropping the occasional release here & there.

Always seeking out that killer remix, if there isn’t one, he’ll make one. These days often seen causing a commotion in the Disco Shed, Gaz brings the party every time.

Dom runs one of London’s funkier record labels, is a music journalist, radio and club DJ which sees him regularly appearing on BBC 6Music and at venues like Big Chill House, Oval Space, The Scala and festivals and parties across the globe.
His vast musical knowledge be it soul, disco, house or the odd soft rock classic, combines with his deft DJing skills, cheeky sense of humour and velvet tones on the microphone make him a Disco Wed favourite. 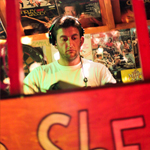 Jack Richens was plucked from the heady limelight of a respected Oxford nightclub and thrust into the obscurity of a garden shed.

When not taking all the credit for other people’s music he curates a small corner of the internet called Loudat.com. He also likes eggs.