Our wedding DJs play Mulberry House in Essex twice in a week!

The last weekend in March and first in April saw two of our super Disco Wed wedding DJs play at lovely Mulberry House in Chipping Ongar, Essex. First up was Paddy, play for Alex & Alison, who booked our DJ only option after meeting us at one of our very first wedding shows and then coming along to one of our parties at the Book Club.

It was a busy day for Disco Wed! Jason was playing at the Barbican Centre, whilst Gaz and I had already installed one of our DJ only set-ups at the Saffron Hotel in Saffron Walden, before heading to Blake Hall, just down the road from Mulberry House, where Gaz was playing so by the time I arrived at Mulberry House I was onto my third set-up of the morning!

It’s a lovely, well located venue being on the outskirts of Chipping Ongar, halfway between the M11 and Chelmsford, a hotel in a lovely old mansion house, with a pretty garden and a really smart wedding ‘wing’ converted from what I’m guessing were the old stables. I’d exhibited a few times at various wedding shows here, so it was nice to finally be playing here and the super friendly staff seemed pleased to see me!

I set up just after the ceremony whilst the wedding party went into the main hotel for reception drinks, and was all ready for their return for the wedding breakfast. I was trying out a new PA – perhaps a bit too large for this venue but it sounded great, and I went off to relax in the main house and enjoy the same meal the guests were enjoying to the soundtrack of laid back jazz I’d left playing for them. 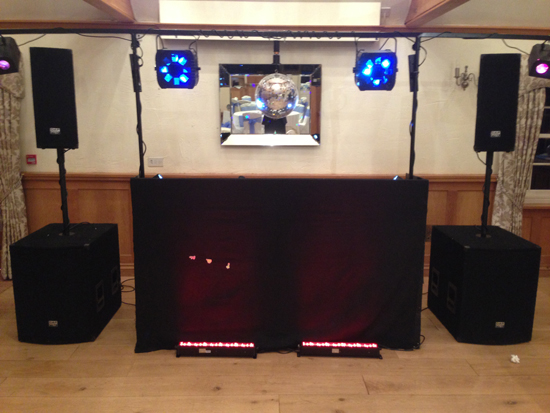 The evening disco was loads of fun, both Alison, Alex and their guests were well up for a party, and danced all night with a particular highlight being a good ole twisting rock & roll section. At the end, Alex had clearly had a good night, as this photo shows!

Afterwards, Roe, the barman there, said it was the first time he’d seen people dancing there all night long! So Jason had a lot to live up to when he played there a week later…

Jason uses a slightly smaller set-up as he plays pretty much just off CD at weddings so doesn’t need quite as much space, and his white fronted set-up looked great at Mulberry House alongside the LED dancefloor that Jon & Holly had hired in.

The dancefloor is something I’d not really given much consideration to in the past, I happily dance in my wellies in muddy fields but as long as it’s smooth and level then you should be able to dance on it in your best shoes! So whilst a LED floor isn’t something I’d normally go for Jason said it looked great, and gave the room a lovely glow!

I actually met the chap, also called Jason, who had supplied the dancefloor at a show a couple of weeks later, and his view was that you need two things to make a party – a good DJ and a good dancefloor, so there you go, what do I know?!! He also reported that he knew it had been a good night as it took ages to clean the floor afterwards. This picture of Holly and Jon’s last dance would appear to back that up!

So there you go, one week apart, same venue, two Disco Wed DJs, same result. Good times! We hope to be back at Mulberry House soon!

I just wanted to say thank you once again for playing at our wedding the other week. I would have messaged sooner but we just got back from our honeymoon!

Everyone said how much they enjoyed the music and it was a good mix of old/new etc. You definitely got everyone up dancing! One of my Uncles said it was the only wedding he has ever seen everyone on the dance floor at the end. The final dance was also perfect… not too cheesy and slow ended the night fantastically. It was such a good night!

Thanks once again for helping to make our wedding so special.

A quick email to say thank you so much for all your hard work on Saturday, you really made it a night to remember. Thank you for playing all the right songs and ensuring that the dancefloor was filled for the entire night with both our young and slightly less young guests.