Andy and Emma attended a wedding show at Ingatestone Hall, where Disco Wed was exhibiting our super wedding DJ services! They had already booked a rock & roll band, and told me they were planning to fill the gaps when they weren’t playing with an iPod playlist.

Now, with so many terrible wedding DJs around, and the need to manage a budget, I understand why people also choose to retain control of the music by taking the iPod route, but it’s a real bugbear of mine! Not because it means less work for us, as I don’t mind losing work to other DJs or to bands at all. Instead, my experience of iPod parties is that they can really lack atmosphere – slow fade-outs and the gaps between the songs can be a real party pooper, the volumes of songs varies all over the place, low bit-rate mp3s sound awful, particularly when played loud over a PA, and that’s before you consider the random order songs can be played in – though that’s often an issue with poor DJs too!

Anyway, rant over! 😎 But you can imagine how pleased I was after the show when Andy got in touch and ended up booking us after all! 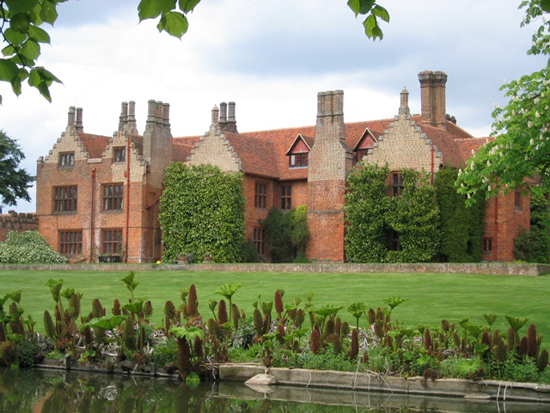 As a former history student (though admittedly not a very good one, hence why I’m a DJ now!) I found Ingatestone Hall fascinating. Built in 1541 by Sir William Petre and still owned by the same family, it’s a classic Tudor manor house, and a very atmospheric one at that. It retains many original features, with wood panelling, mullioned windows, open fire places and many paintings of Petre family ancestors through the ages giving real presence to the house’s past. 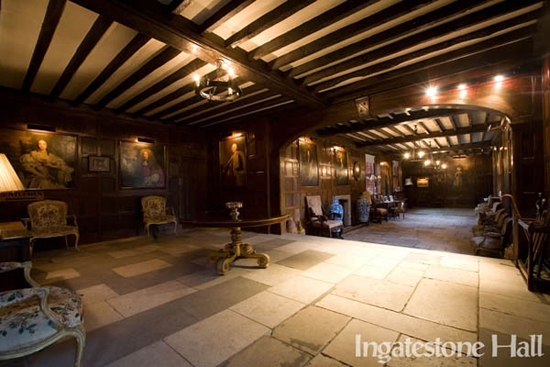 As Andy and Emma had decided to take advantage of our services for the full day, I set our PA up in the room pictured above, and left some nice laid back guitar-y stuff playing as background music to accompany the meal as I went off to set up our DJ only option where the evening reception was taking place later on.

Just as I finished, the band arrived and set up in front of my stand, a speaker blocking our lights, but with such a tight space it was always going to be difficult getting everyone in! It turned out that the keyboardist was also one of the wedding guests so the band rigged his keyboard for him, nice touch!

We all had time to eat together backstage before it was time for the first dance. I love the Beach Boys and have seen Brian Wilson live a few times, so was delighted that Emma and Andy had chosen God Only Knows – surely one of the most heart-breakingly perfect love songs ever written.

After this, I handed over to the band – who really looked the part, proper rock-a-billy hair cuts and everything! They played an excellent selection of rock & roll and rhythm & blues, something I often enjoy playing at weddings anyway, and I was careful not to duplicate any of their choices! In fact I avoided playing any rock & roll until after they’d finished their second set!

With the night split into chunks, with the band and me playing in hour chunks, it was soon nearing the end of the night. I’d been trying to play all the tunes that Emma and Andy had asked for, so due to a lack of time and opportunity I’d not managed to play any of the Rihanna requests I’d had (which based on the play list I’d been given came as a surprise!) so I went hell for leather with a bumper Ri-Ri megamix, fitting as many of her tunes into 10 minutes as possible, which fortunately went down a storm and I hoped made up for the wait!

Andy being a West Ham fan, had also asked for I’m Forever Blowing Bubbles, which shamefully I didn’t have with me. I don’t like to disappoint though, so despite supporting a different team who play in the same colours, I took the opportunity to sing the song myself, a capella, which mercifully soon the whole room joined in with, ultimately making a real highlight!

After this, there was just time for Andy and Emma’s last dance, another belter in I Believe (When I Fall In Love It Will Be Forever) by Stevie Wonder before it was time to call it a night.

I actually didn’t feel I’d done a particularly good job on the night. We aspire to be the best here at Disco Wed, having extremely high expectations for ourselves, and we’re hard on ourselves if ever we don’t match those expectations. But the truth is that sometimes it can be almost impossible to keep people in one room, dancing all night, and over the years I’ve learned it’s not always the fault of the DJ. If there’s a band, then that can make things difficult because by the time you have got things going, it can be time to stop – which applies to the band too. Sometimes these changes work really well, but it can also make for a slightly disjointed night, particularly with differing styles of music. And if there are other rooms for people to go into, then they often will, especially if one of them has the bar! Add to that old friends seeing each other for the first in a long time and understandably wanting to catch up, then maybe expecting a full dancefloor all night every night is unrealistic.

And sure enough, a lovely card from the happy couple afterwards assured me that maybe I was wrong to be so down on myself afterwards. Add to that that the lovely venue manager Chris emailed me a few days after the gig, complimenting me on my set-up, professional approach and my DJ set – and asking if we would like to be added to their recommended suppliers list, so it seems it was a job well done after all! 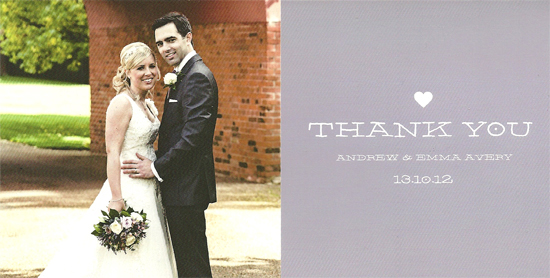 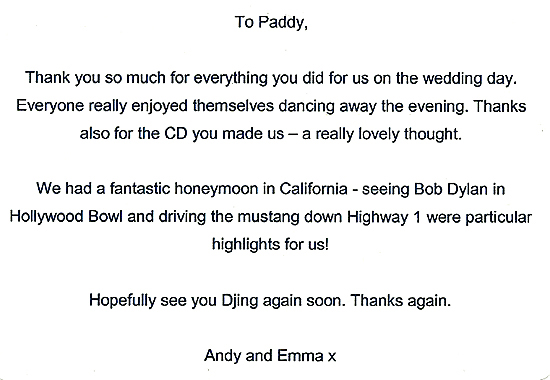 Thank you so much for everything you did for us on the wedding day. Everyone really enjoyed themselves dancing away the evening. Thanks also for the CD you made us – a really lovely thought.

We had a fantastic honeymoon in California – seeing Bob Dylan in Hollywood Bowl and driving the mustang down Highway 1 were particular highlights for us!