I met Nick and Gemma at a wedding fair in Cambridge in early October, at which point they told me it was very early days in their engagement and their wedding was a long way off. So, to say I was surprised when I got a call a couple of weeks later asking if I was available on 15th December to play at Fennes Estate would be an understatement!

Being the sister venue of Parklands – which is pretty much my ‘local’ – I was delighted to find I was free, particularly as I’d not been to Fennes yet and was keen to see it. 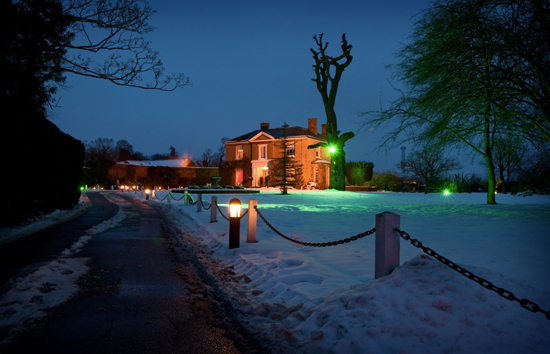 I met Gemma and Nick for a second time one evening at their house, where Nick claimed to like ‘weird’ music and Gemma not to be a huge music fan at all. After a good chat though, we established a few tunes they both liked which formed the basis of a playlist, and both were keen to stress they were happy to leave the rest up to me.

Fennes is a lovely country house, and similar to Parklands has a huge marquee in which the entertainment took place. Unlike Parklands, I noticed one of the inside rooms has an in-built DJ booth and dancefloor area with disco lights which looked pretty good, almost reminiscent of a small room in a club. Certainly handy if I ever play inside in the future!

This time though, it was to be the Disco Wed DJ option, which I set-up to one side, leaving the stage for a covers band who when they arrived a bit later on I realised I’d played with earlier that year at Matt & Michelle’s wedding! Small world…

After the first dance (You Do Something To Me by Paul Weller), Gemma danced with her Dad to Airrion Love; Russell Thompkins: You Are Beautiful before I handed over to the band. We alternated 2 x hour long sets before I wrapped things up at 1am.

“From beginning to end you made everything so easy for us, liaising with the band and the wedding venue direct took a huge weight from us.

You did brilliantly and everyone has said how much they loved the dj and thought he was a ‘brilliant guy’. Everyone loved the music!

We will definitely recommend your services for future parties.”