We were so excited when Chris & Julia asked us to DJ at their wedding – then told us it was taking place at the incredible Eden Project in Cornwall. It’s a place I’d always wanted to visit but had never had the opportunity.

Julia’s work takes her between Cornwall and London, where the couple live, so we arranged to meet at one of our Disco Shed Sunday sessions at the Big Chill Bar and after DJing I joined them for a pint to get planning!

They had heard of us through a friend and initially liked the idea of our indoor shed, but after running the full range of options they decided to break the budget and upgrage to the full shed. After all, every garden (even one like the Eden Project!) needs a shed! 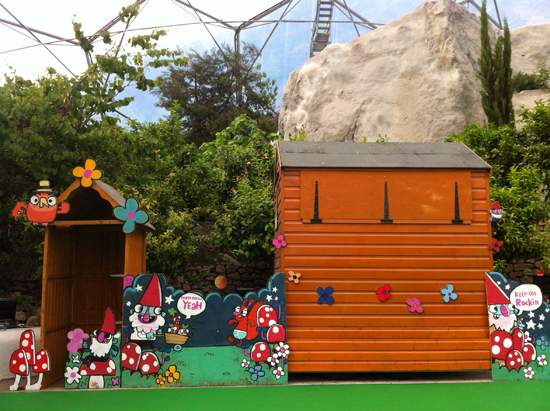 Disco Shed set up but closed for business

Chris and Julia had kindly offered to put me up where the rest of the guests were staying and with such a long way to travel, I headed down there the day before. A late arrival plus my excitement at the weekend ahead meant I didn’t get much sleep, but I was up early to organise my kit in the shed and van and head to the venue.

Upon arrival – even going through the delivery gates – it was a mind-blowing sight, some otherworldly, glass-golf-ball-like pods stuck on the side of a sheer cliff face, a landscape the leftovers from a past as a china clay mine. 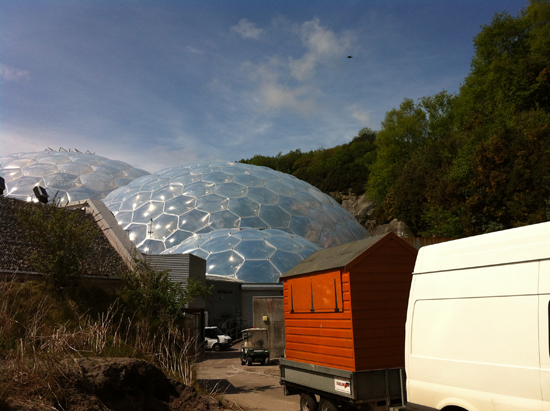 Arriving at the Eden Project

Without our usual crew to help me, I was relieved to find the Eden Project staff were a lovely, and unbelievably helpful bunch. A team of 6 lads and lasses managed to manoeuvre the shed past puzzled members of the public, manhandling it into position 200m or so inside the biodome in no time. I set about getting everything ready for the happy couple’s arrival, placing some of our gnome and animal characters in around the plants where they looked right at home!

Setting up the Disco Shed is a big job, particularly for one person so I worked hard and fast, only allowing myself a quick break to see the Olympic torch – which had landed in Cornwall the previous evening – pass by in the hands of TV’s Ben Fogle! 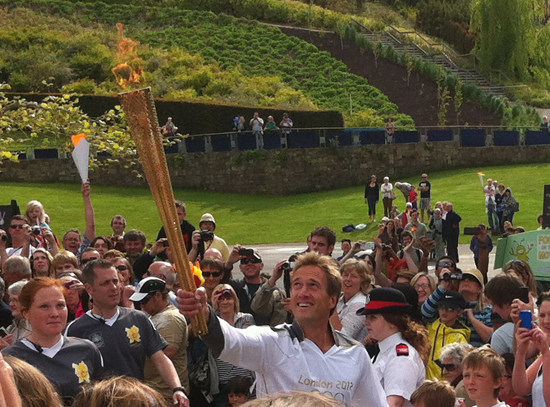 Chris and Julia arrived in style in an amazing bubble car, then had a drinks reception in front of the shed with musical accompaniment provided by an excellent local acoustic duo, whose version of Sam Sparro’s Black & Gold was especially good. Ever keen to maintain a low profile until performance time, I took the opportunity to set up the decks and tidy up inside the shed! 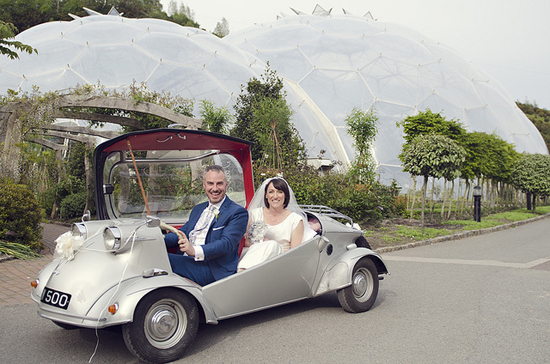 When everyone disappeared for the wedding breakfast, it was time to mount the screen on the roof, rig the projector, and put the lights up – which involved losing a fight with a lemon tree (they are VERY spiky!) – before changing into my suit and eating the same lovely meal as the guests, all made from locally sourced ingredients, it was delicious!

Then, as darkness fell, it was showtime! Chris & Julia chose to have their first dance to The Smell by Superthriller, and to follow this with Amy Winehouse’s Cupid. In such a cavernous space I was unsure how the PA would sound as echo could prove troublesome, but happily the amazing acoustics helped fill the venue with sound. 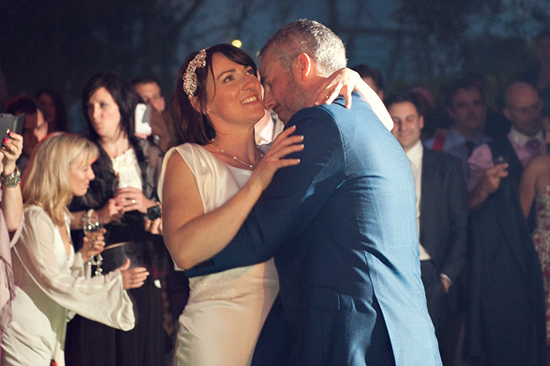 Chris and Julia had decided to indulge in some DIY disco action, so after a while came and joined me in the shed. Their tune choices started as an amusing battle, one cussing the other, (Chris: Gold Digger by Kanye West >> Julia: Mr. Big Stuff by Jean Knight – touché!) before settling down into some more fond (You Sexy Thing) then party orientated tunes (I See You Baby). Chris was having so much fun bouncing behind the decks I thought the suspension on the trailer might pack in! 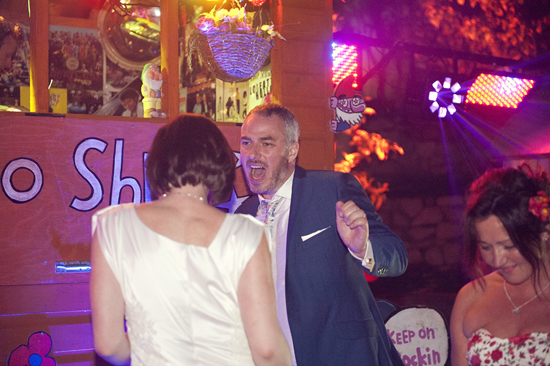 After this it was back to me to keep everyone entertained, until a surprise visitor made his grand entrance! What with our jungle-like surroundings it seemed apt that a gorilla (ok a man in a gorilla suit!) swung down the steps onto the dancefloor – luckily I’d been warned of his arrival and had Jungle Boogie by Kool & the Gang ready to go! Mixing from this into the Jungle Book was a challenge but I just about managed it to make it work! 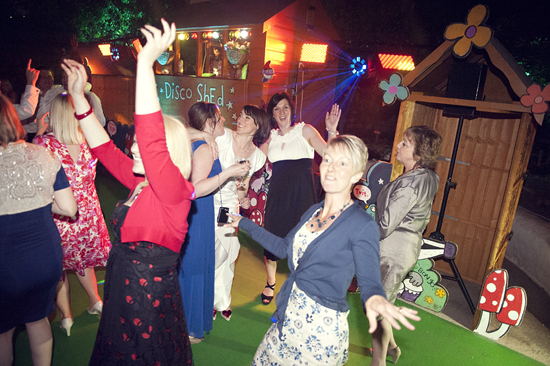 Whilst DJing, I’d been trying to think why I recognised one of the guests, until I randomly glanced upwards and the penny dropped! The inside of the Disco Shed is decorated with kitsch old record sleeves, and right there about the mixer is one by the Nolans! Sure enough, I looked again and it was definitely Bernie Nolan! With too good an opportunity to miss I said hi and showed her the shed, including her younger self, and asked if she had any requests. She was a lovely woman and her suggestion of the Bee Gees was right on the money at the time, and I couldn’t resist following them up with I’m In The Mood For Dancing which fortunately seemed to go down well with everyone! 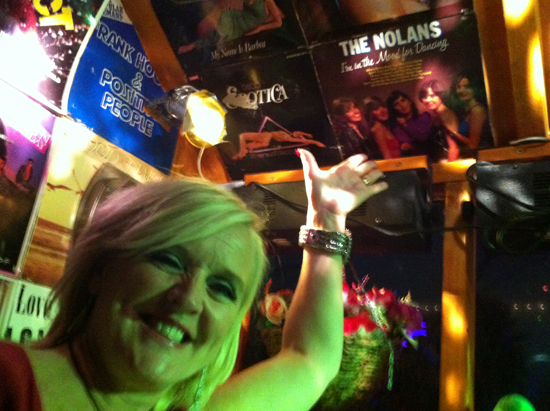 Bernie Nolan in the shed!

The rest of the night flew by, and it was such a shame when it had to end. We’ve used the shed in some stunning locations, but the Eden Project really was one of the most awe-inspiring yet and I’m very grateful to Di Hall and all the staff there for making it such a pleasant experience, not forgetting Chris and Julia for giving us the opportunity to play there. I hope we can return again before long! 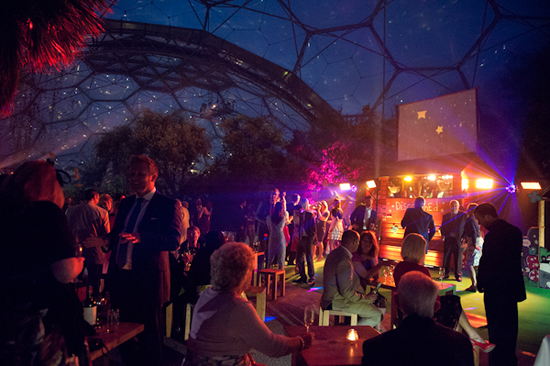 “Paddy went out of his way to make sure that our party went exactly the way the wanted and this was down to his careful planing and obviously his DJing ability on the night. My wife and I are both keen music fans but we quickly realised when we talked to Paddy that he knew a great deal more than us about music and how to keep a dancefloor full. So rather than picking a full playlist ourself we sent Paddy a list of songs that we love and asked him to play “that kind of thing” but gave him the freedom to play what he thought best. Paddy managed this perfectly, playing songs we loved from our list and songs we didn’t think about before the big day but that fitted in perfectly with the vibe of the day and evening.

Paddy is not your run of the mill wedding DJ, he is clearly a professional DJ with a love for keeping a party going who happens to sometimes do weddings! We would have no hesitation in recommending Paddy and Disco Wed to friends and family and can’t thank him enough for the work he did on our big day.”

We also received these lovely words from the event manager at the Eden Project after our appearance at Chris & Julia’s wedding there!

“You were absolutely brilliant on Saturday night and fit into Eden so well. I can add you to a list of suppliers we send out to people getting married at Eden so you might get some more weddings/events.”

Tunes of the night

Weddings at the Eden Project