I first met up with Francis and Claire a couple of months before their wedding. The Barbican was the obvious meeting place as that was going to be the stunning backdrop to their big day. I never knew such a place existed, but I found myself taking a stroll with them through the huge conservatory hidden away on the 3rd floor, talking through their plans and musical wishes surrounded by tropical plants, palm trees, exotic birds and a pool which contained the largest coy carp I had ever seen. A cross between Kew Gardens and Jurassic Park, all neatly tucked away within the brutalist concrete architecture that is the Barbican!

The couple had opted for the Indoor Shed and it looked fantastic in the ajoining Garden Room where the tables had been laid out in anticipation of the guests arriving. With the stunning view of St Pauls cathedral out the window behind me, I began at 8pm after an afternoon of playing the Brazilian music I had compiled on the wishes of Francis. It was certainly in keeping with the tropical plants, if not the snow that was falling on the city outside! 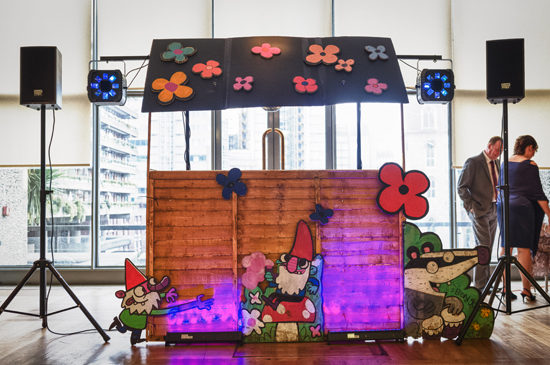 The couple decided last minute on their first dance, and while Al Green’s lets stay together began, the guests quickly formed a circle and then began to join in. A cross between modern pop, disco classics and indie belters was the order of the day, and it’s always a satisfying sight to see the bride and groom pogoing around the floor to the songs they love.

What a brilliant night!

The whole event went very well, and Disco Wed helped make it special. Aside from the tunes, the party games were great (swing-ball a particular favourite).

Weddings at The Barbican