Our last wedding DJ set of 2012 took place at the historic home of the Bishops of London, Fulham Palace. Unfortunately the Bishops weren’t at home at the time, presumably out doing some last minute Christmas shopping, which at least meant we had the place to ourselves! 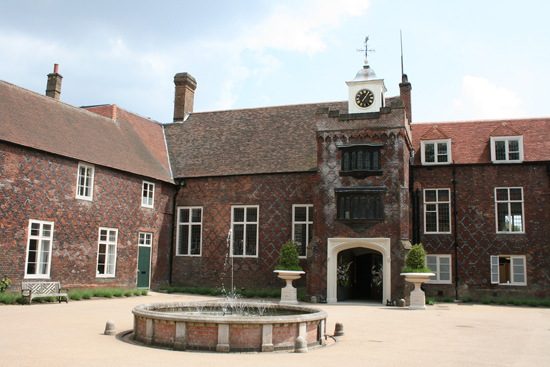 Anna & Charlie had heard of us through a friend, Laura, who Harry played for at Belchamp Hall in July, (though they’d already booked us by then) so they knew what to expect from Disco Wed. After a few unsuccessful attempts to meet Charlie and Anna at the venue, we settled for a drink in Hammersmith a couple of weeks before the wedding, where they gave me their cheesy (Anna’s words!) playlist and we worked out our plans for the day.

Whilst not as large or grand as you might expect from the name, at least via the courtyard entrance, it’s an impressive place which oozes history, the Great Hall where the drinks reception and disco took place has a plaque on the wall commemorating how long the building had been there, which itself was from the 19th century! Important to take extra care then! 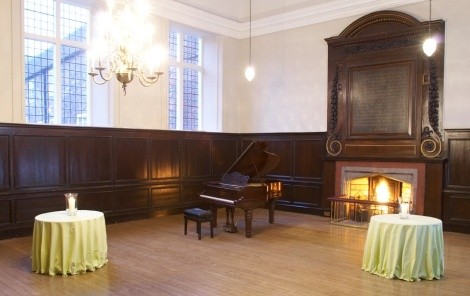 I arrived early to set up a PA and wireless mic outside in the marquee where they would be having their wedding breakfast (a marquee in December, I know!!) before waiting for the drinks reception to end so I could head inside and set everything up. It was quite a walk to and from the van with all the gear, but happily by now there was a big fire going in the hall so at least it was nice and toasty! 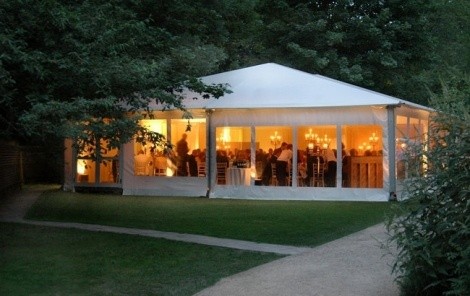 Charlie and Anna had booked the DJ only option which suited the room well, the uplights in particular helping it settle in to the elegant surroundings. There wasn’t much time to enjoy this though as the sight of folk streaming back in to the main house told me the speeches were over which meant I had to pop back over to the marquee to get the PA for the disco.

Then before you knew it, we were off! Charlie and Anna had chosen (Your Love Keeps Lifting Me) Higher & Higher by Jackie Wilson as their first dance, so I knew to expect a good party. They had asked me to follow this with I Gotta Feeling by Black Eyed Peas which in all honesty really isn’t a favourite of mine but who was I to argue as everyone went nuts! I was actually a bit worried about how warm the room might get with the fire still burning but no-one seemed to mind.

Even with many other rooms for guests to disappear into, including the one with the enormous cheese board, the dancefloor remained busy for the whole 3½ hours as I worked through their playlist, with the last half hour of 80s soft rock anthems from the list seeming a particular highlight for all the guests!

The 1am finish didn’t stop the end seeming to arrive as quickly as ever, so with an appropriately Christmassy tune it was time to call it a night, for the last time in 2012.

We just wanted to say thank you so very much for DJing at our wedding and giving us such a fun and happy night. The dance floor was always busy and we cannot tell you how many people have specifically mentioned how brilliant they thought you were (we agree!).

We are so grateful for all your help and enthusiasm both during the lead up to the wedding and on the night.

We will certainly be recommending you should the opportunity arise – we think everyone needs you at their wedding!!

Also, what an amazing and thoughtful surprise to receive our CD. It is already on re-play in the car!

Thank you again Paddy – you were totally fantastic!

With love, Anna and Charlie.

PS enclosed is a very small ‘thank you’, hopefully you can have a few drinks on us.”