I had a great time playing for John & Katie at the London Canal Museum in Kings Cross. Not knowing the venue, I popped in whilst in town a week or so before the big day. It’s a great place, spread across two floors and backing onto the Regent’s Canal. As I looked around, I actually jumped as a replica horse neighed just as I passed it! I’ve always been nervous around horses, even fake ones it seems!

As a working museum, and open until 5pm I was intrigued as to how it would work as a wedding venue. But, whilst the guests enjoyed a champagne reception and the speeches downstairs, the staff set about clearing out the exhibits upstairs and setting up the tables for the meal and I set up our DJ only option at the same time. 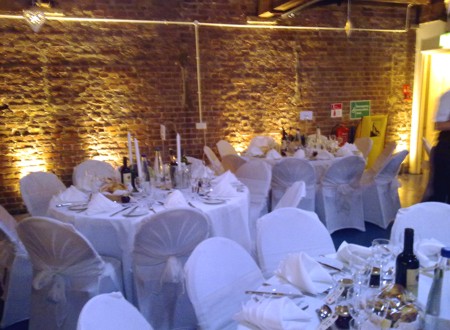 Despite not actually meeting we’d had a few phone chats though to discuss the tunes, and other the first dance, John was happy to leave it to me! I played background music during the meal, after which there wasn’t long to party – so we hit it hard! I was helped by a brilliant choice of first dance – Nina Simone’s My Baby Just Cares For Me, during which everyone got up on the floor, and kept dancing until the end barely two hours later.

Sometimes a short night can make for a better party – though I don’t know if that applies here as John, Katie and their guests were all great fun and seemed to be up for a party however long it’d last. But the fact they were all so cool about not having long, and just got on and made the most of what time they had did seem to make it more special! Loads of fun!!

“Thanks for your excellent work keeping the dancefloor full on the night, we had a brilliant time and have had loads of great feedback from the other guests on the music, it was just the sort of stuff we wanted!”