Our penultimate wedding of the year saw us travel to Ware in Hertfordshire (cue endless Ware / where hilarity) to play for the first time at the impressive Hanbury Manor for Luke and Louise, and on the day the world was supposed to end (it didn’t!). Disco Wed had been kindly recommended by Chris & Julia after we played for them at the Eden Project back in May. And after met with Luke and Louise at the venue a few months before the big day to have a look round and get planning, they decided they were definitely keen to go ahead and book us! 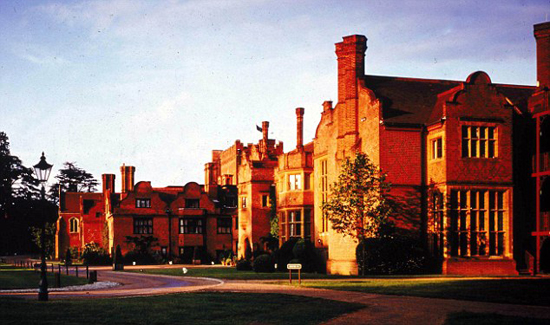 They booked our DJ only package, but made full use of our services for the whole day, surrounding themselves with music from start to finish across three different rooms for the ceremony, the drinks reception in the bar and then the wedding breakfast, speeches and disco. Two PAs and an early start were clearly in order!

I arrived and was welcomed with a much appreciated coffee by the lovely venue staff, who showed me the best places to park for each room. First of all, it was time to get the ceremony room ready with PA and laptop playing background music (Louise asked for Vivaldi’s Four Seasons) before any guests arrived. Then to room number two, with PA number two, to be set up ready for a swift changeover for the drinks reception.

There was still plenty of time to move the van round to the other side of the hotel and unload a few bits for the evening disco into the main hall, before getting changed into my suit and heading back to the ceremony room where guests were getting seated – impressively there was exactly the right number of seats for everyone!

Louise arrived looking stunning, so it was down with Vivaldi and up with Puccini’s O Mio Babbino Caro, as heard in the film A Room With A View for her entrance. Witnessing two people you hardly know get married can feel slightly strange, but it was a lovely ceremony, full of happiness and humour – not always intentional, admittedly which really helped set the tone for what was evidently going to be a lovely day. And as Luke and Louise led everyone out giving me a beaming smile and thumbs up I felt delighted and honoured to have been able to help it happen!

A quick repositioning of the laptop to accompany the drinks reception then it was time to get everything else ready in the main hall – a former chapel with a lot of original features still in place and a grand piano in the sanctuary, where I would be. I was glad I’d already made a start in here as I really wanted to spend time making the most of the space with the uplights, particularly where some statues looked back into the room. The end result was pretty spectacular – making the whole area under the arch glow with colour!! 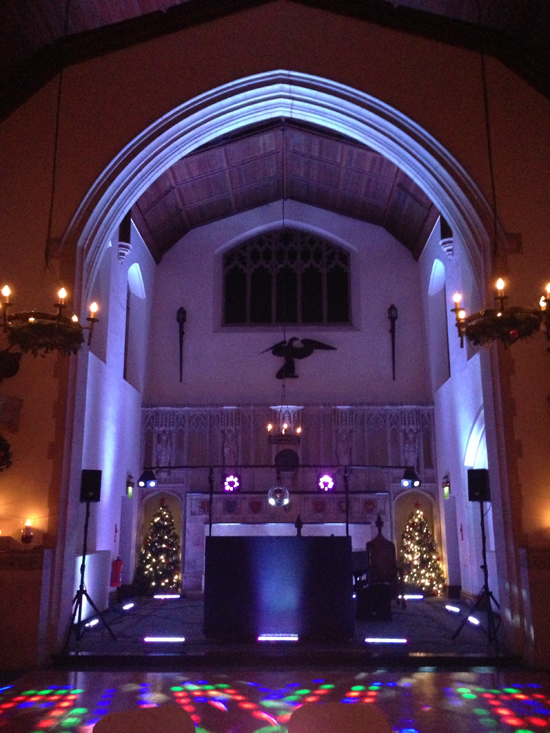 I’d set the decks up on the wheeled trolley in order to ‘park’ it to one side during the meal, which was just as well as Luke and Louise came in to have some photos taken at the piano. Shortly after this, the guests started getting seated at the tables, so it was time for the final laptop move, in order to play the swinging jazz numbers requested to accompany the meal. Given the time of year, I’d included a lot of Ella Fitzgerald’s wonderful Swinging Christmas on this play list, which was a particular pleasure to hear over the PA I’d brought with me from the ceremony room earlier! An unexpected highlight was jazz pixie Jamie Cullum’s brilliant, impassioned cover of Don’t Stop The Music by Rihanna – belting!

After packing up PA number two from the bar I actually had a rare moment to stop, in which I enjoyed the same tasty meal as the guests before taking sanctuary in the sanctuary to enjoy a sit down whilst the speeches took place, making use of our wireless microphone.

After the meal, the venue staff set about turning the room around and I wheeled the deck stand into position and made some final adjustments to the uplights to make the figures really stand out. 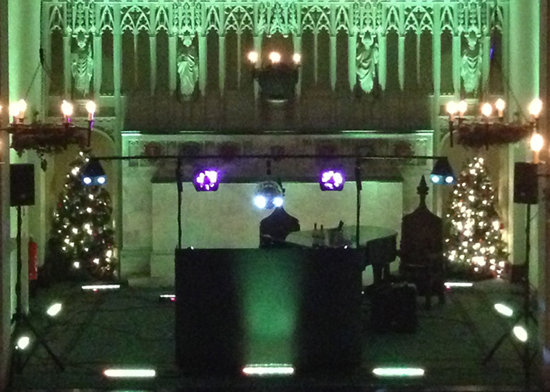 Then it was time to kick off the party! Luke and Louise had picked another jazzy number as their first dance – Etta James’ beautiful At Last, a stunning choice! As with other large venues with the bar elsewhere, and lots of rooms for people to get lost in, I feared it might be difficult to keep everyone dancing, but they turned out to be a brilliant, up-for-it crowd and there was never a danger of an empty dancefloor in the whole 4 hours! A particular highlight had to be Louise’s Dad coming up and dancing next to me as I played Soul Man and Sex Machine – what a mover!

Another smashing night and great venue – the staff were all fantastic, highly recommended!

“Hope 2013 is a great year for Disco Wed. Happy to give recommendations or comments when back in UK. We are still enjoying recollections of the big day. Music was spot on, especially during the wedding breakfast.”