Jeremy and Gillian got married on a beautiful day at the incredible Ickworth House, near Bury St. Edmunds in Suffolk and asked Disco Wed to provide their wedding DJ. If you want to impress your guests then you could do a lot worse than choose this National Trust property. 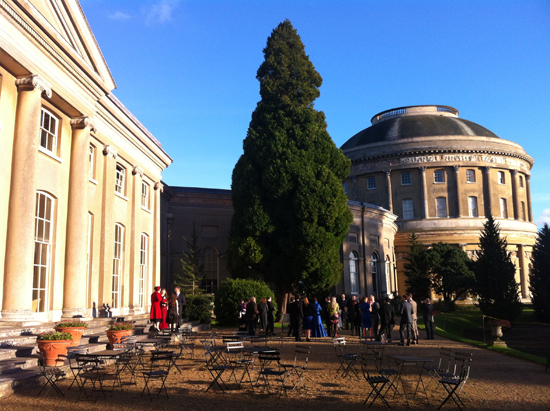 Gillian had seen the Disco Shed in action at Latitude Festival so had an idea of what to expect from us and booked our Disco Wed DJ option. We’d exchanged a few emails outlining her plans for the day, which involved me playing music during the ceremony, a drinks reception downstairs on the terrace, the meal and of course for the disco. Another full day then!

I arrived in the morning, and was grateful to find a lift as the main room was on the second floor. I set up in the corner of the room, whilst couple of Gillian’s Danish friends – who were to play an hour long acoustic set after the meal, including their first dance – set up in front of me. With a couple of wobbly mic stands amongst their hired in kit, they were grateful me and my screwdriver were around to help them fix it up! Naughty hire company…

As guests started to arrive, I played some tunes to welcome them in. With Gillian being a Latitude shedonist, a festival notable for it’s eclectic, cultured programming and fairly indie-focussed music line-up, I stuck to some nice laid back soundtracky and guitar type stuff, Beach Boys All I Wanna Do, Kings of Convenience, Sondre Lerche, Merz (who I love any time!), and my two favourites on the day, My Sweet Lord by George Harrison, and the incredible Holy Thursday by David Axelrod.

Then it was time for Gillian to make her entrance. She’d asked to walk in to One Day Like This by Elbow, which, given the weather, surroundings and occasion, felt like the perfect choice and sounded great! During a phone call a couple of days before the wedding, Gill had mentioned she was also considering La Ritournelle by Sebastian Tellier which is a favourite of hers (and mine!), so I had this in reserve and decided to play it whilst they signed the register.

Jeremy is Jewish, from New York, so after the civil ceremony followed parts of a Jewish ceremony too, with an amusing commentary by one of his relations. I’ve never been to a Jewish wedding so found this bit interesting – full of intriguing rituals, particularly regarding the physical aspects of marriage! And after this, the new Mr. and Mrs. Goldman led out their guests to Feeling Good by Nina Simone. Perfect!

Once everyone was out, I unplugged the PA and laptop and moved it downstairs to provide some sounds for the drinks reception, before heading back up to set up the lights.

The main room at Ickworth is a large space with a mezzanine level and an impressive vaulted ceiling. It has a mixed history, including time as a grain store so it’s great that it’s been reclaimed for more memorable purposes! I set up our uplights between the windows along the wall behind the head table, which looked pretty good – well placed uplights can make brickwork look really cool. 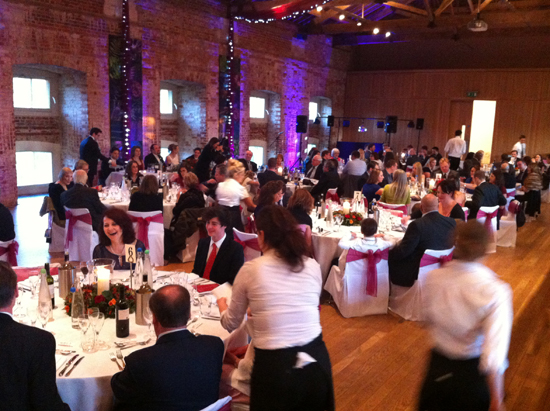 As everyone started returning upstairs for the meal, I nipped down to collect the PA and bring it back up to it’s previous location, thanking my lucky stars for the lift again! For the music accompanying the meal, I carried on in the same vein as the ceremony, leaving a playlist playing whilst I popped off to Bury St. Edmunds to put some diesel in my thirsty van!

At the end of the meal, Gill and Julian’s Danish friends played their excellent hour long set of covers, whilst I discreetly amused myself by taking some photos of our set-up from unusual angles! I also took the opportunity to listen hard to the quality of the PA they’d hired, as it was a Mackie system which seems to be popular with a lot of DJs. I’ve often thought these sound slightly muddy and a bit flat – definitely not bad, just not as clear as some – and listening to this one this did nothing to convince me otherwise. I’m really pleased I found the rig we use – they are so compact, yet loud, easy to use and have such a lovely rich and warm sound! 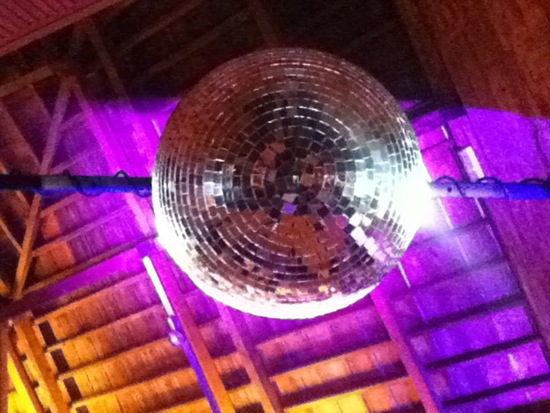 Mirror Ball with uplighters on the vaulted ceiling 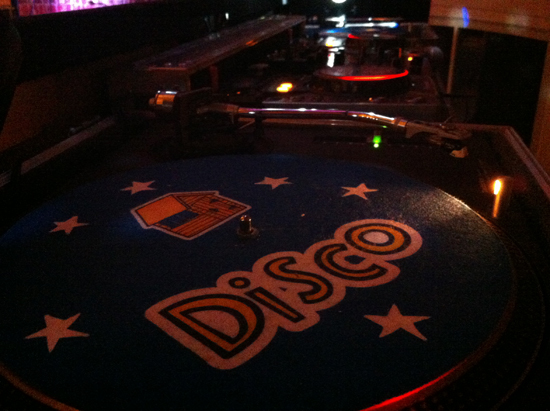 With no first dance for me to play, and the band having played so well it was difficult to know what to start with, so I hit them with Superstition by Stevie Wonder – I’m yet to find any party dancefloor which doesn’t love this absolute classic and sure enough it went down a storm!

Gill had given me no playlist at all, instead trusting me to get on with it, but the American groomsmen had other ideas! Unbeknownst to me, they were planning to sit Gill down and serenade her with Top Gun classic You’ve Lost That Lovin Feeling by the Righteous Brothers, before launching into some Jewish music and lifting her up in the chair. Luckily the first song was no problem, and as it turned out I had John Murphy’s and Daniel L. Griffith’s version of Hava Nagila as well, which was exactly the tune they were after! Phew!

As is often the case when handling requests, the main problem is not playing it, but finding the right moment to play it – as people seem to want it instantly which is almost always a bad move. This struck me as the perfect thing to break up a long set, so despite lots of insistence from one particular usher, I just about managed to persuade them not to do this too early and to trust me when to do it.

And when the moment came, it was worth the wait! The seranading was classic, the chair lift frankly terrifying – but fair dos to the lads, they managed to get her up for the duration of the song, and down again without a danger of injury. Again, phew! 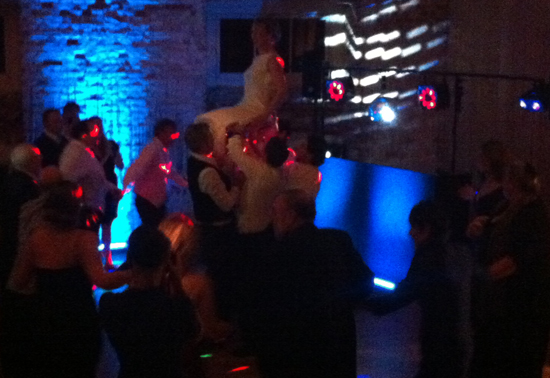 The rest of the evening passed off incident free and with a great party. In New York it’s common to give a tip for good service. And as the night ended with a huge round of applause and people screaming for my name, the same usher who’d been on my case earlier on came up and gave me £20. God Bless America!

“Thanks again so much for doing such a brilliant job at the wedding – everyone loved the music and we all had such a great time – I’d highly recommend you to anyone!”

Weddings at The West Wing at Ickworth House