Our first wedding DJ gig of 2013 was actually a civil ceremony, at lovely Fallowfields Hotel and Restaurant in Oxfordshire, where we’re delighted to be preferred supplier. It’s a lovely venue, a boutique hotel set in lovely grounds, with a farm and on some days even has falconry displays which are great! Plus, the food there really is delicious – many of the ingredients are grown in their own garden and I always look forward to eating at Fallowfields! 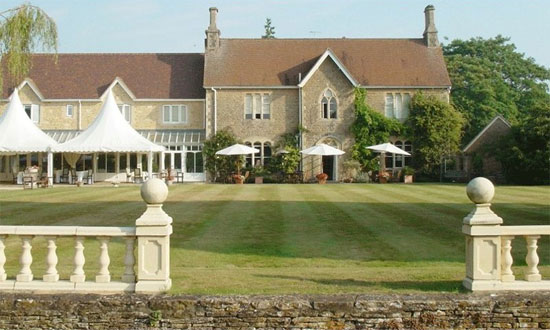 We were recommended to Kelly by the venue and this must be the fifth or sixth time we’ve played there. Every occasion has been very different – we’ve used all of our different options, once even setting up the full Disco Shed in their field.

This time though, it was to be our DJ only option. Kelly and Sally were exchanging vows at 5pm but despite this late start had planned to start the reception soon afterwards. So, I spent the afternoon setting up as much equipment as possible on a trolley in a corridor next to the main room in order to help turn things around as quickly as possible after the ceremony, proving we’re not proud here at Disco Wed! 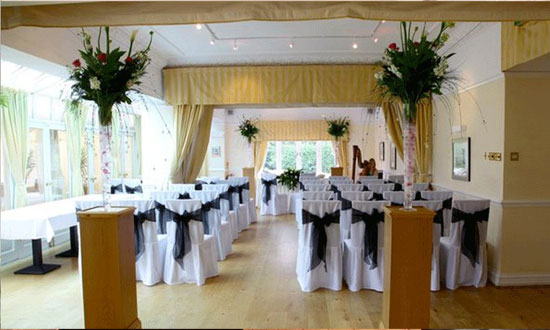 I was also scheduled to play music during the ceremony, so as the guests arrived played some classical covers of indie classics by Vitamin String Quartet. It’s dangerous territory covering popular songs in a completely different style, running the risk of sounding like Kenny G-esque hold muzak but you’ve got to hand it to these players – they do it brilliantly, great arrangements and really well played. Check out their version of D.A.N.C.E. by Justice for example…

Kelly and Sally wanted to walk in to 1000 Years by Christina Perri, an artist apparently becoming one of the more popular choices for first dance tunes, though I must admit I don’t know much about her. Google tells me she is featured in Twilight – something that again I know nothing about, which may explain my lack of knowledge! Anyway, the song is recorded in two parts and before the big Kelly and Sally were having trouble deciding which part to go for. So I ended up creating an edit of both – so Kelly could walk down the aisle to part one before it segued seamlessly into part two for Sally’s entrance. Happily it seemed to work and no-one noticed the join!

Most of their focus had been on the ceremony music, and their choice of two Andrea Bocelli pieces whilst they signed the register were timed perfectly, with both the signing and the singing finishing at the same moment! For the exit music, they wanted something uplifting and happy, and went for Andy Williams, Can’t Take My Eyes Off You. Truly a classic! With guests still leaving, I tried to keep it in the same vein by following up with another couple of classics by Jackie Wilson – The Sweetest Feeling, and (Your Love Keeps Lifting Me) Higher and Higher, people were dancing as they walked out!

Then it was action stations! The venue staff and I only had about an hour to turn the room around ready for the evening reception and disco – so I quickly wheeled in the trolley, avoiding the chairs and moved the PA down to the other end of the room where the disco is usually set up. James at Fallowfields is a big fan of our uplights, so once everything was in position, I rigged as many of these as possible and fixed up the disco lights, just before the kids starting pouring back in and causing havoc!! 😎 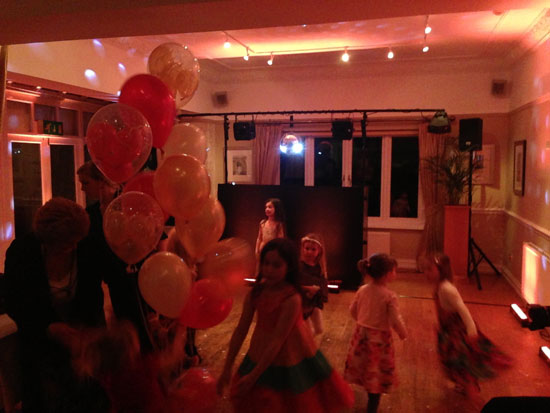 Kelly and Sally had booked a wide range of different canape style finger foods in order for their guests to be able to try as much different food as possible, which was a nice touch. The portions were small individually but there was so much of it that it was impossible not to be stuffed if you had everything! Not that I had time to of course! 😎

Eventually it was time to start the discco. They had chosen not to have a first dance, which can make getting the party started difficult, but it didn’t take too long to get them going with a few classics! One odd request was being asked for something funky, which given I was playing Upside Down by Diana Ross confused me slightly! But apparently funky means Rihanna and her auto-tuned, processed, pounding identikit beats rather than one of the greatest female soul singers of all time backed by the inimitable guitar playing of Nile Rodgers, surely one of the funkiest guitarists ever to pick up the instrument. I don’t know anymore – maybe I’m getting old!

Fortunately I also had a request for some more, popular 70s disco so Rihanna could wait, plus Sally had specifically wanted to row the boat to the Gap Band so that served to keep the girls dancing until it was time to hit them with some more recent mainstream hits, including good old Ri-Ri of course!

It was a great night, really good fun and Kelly and Sally danced all night. We were scheduled to finish at 1am, but Sally actually asked me to stop early as she was so tired! So, they literally danced until they dropped! We’ve had people complain about having aching feet after our sets, but I think that was a first! 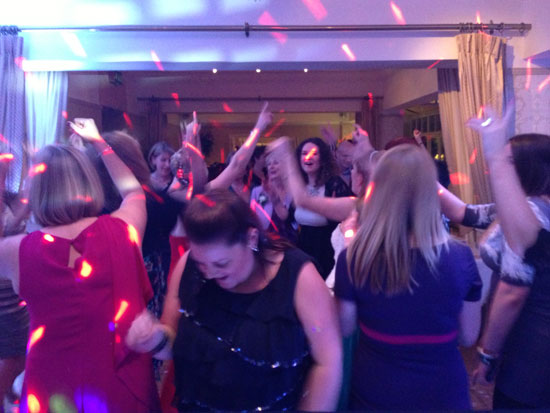 “Thanks so much Paddy for an amazing night, it was brilliant – the tunes were amazing and helped make our special day perfect. Many thanks again”